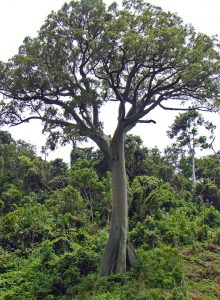 Coastal Dry Forests are a unique ecosystem with high levels of endemism (containing many species found nowhere else).  These forests are characterized by a pronounced dry season during part of the year, which provokes a variety of adaptations in plants and animals.  Many tree species are deciduous, losing their leaves at the onset of the dry season to reduce water loss.  Plants also encourage store moisture in waxy leaves and tissues that swell with water collected during the rainy season.  As that stored water is used in the dry season, it must be protected, thus many dry forest plants have fearsome spines.  Some trees, like the resident Ceiba (Ceiba trichistandra) even have green photosynthetic bark that allows the plant to keep growing even when its leaves have dropped.

Animals, too, have developed adaptations to the challenging dry season.  Amphibians and insects will burrow deep into damp mud, and lie dormant until the rains return.  Other species, including howler monkeys, change their diet and behavior during the dry season, even going so far as to become less territorial when resources are scarce.  Anteaters start eating far more termites, which have a much higher water content than their preferred food, ants. 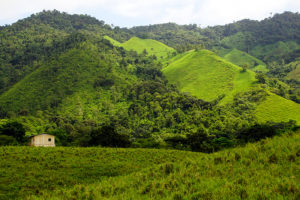 These unique ecosystems are under threat, and so are the plants and animals that rely on these habitats.  Dry forest are easily converted cattle pasture, more so than tropical rainforests because the dry season permits annual burning, has richer soil, and lower rates of disease (for livestock and people).  Wholesale conversion to agriculture — principally cattle and bananas — has resulted in large scale habitat loss and fragmentation: less than 2% of the original dry forest habitat remains in Ecuador.

Ceiba has long been a champion of dry tropical forest protection, beginning with our establishment of the Lalo Loor Dry Forest Reserve in 2004.  Today our work on the coast of Ecuador also comprises community development partnerships that promote sustainable micro-enterprises and agriculture models, and the creation of a continuous corridor of protected forests, the Coastal Conservation Corridor.