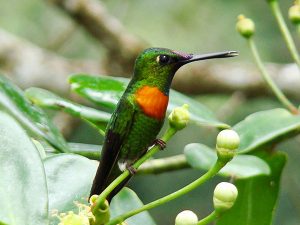 Home to more species than any other ecosystem on Earth, the Amazon Rainforest is a veritable cradle of biodiversity and evolution.  Covering just 7% of the planet’s land surface, tropical rainforests harbor more than half of all species, including two-thirds of all plants on the globe. In just a couple acres of  the Amazon one can find over 1600 different kinds of trees; by comparison, most states in the US host less than 100!  Those plants, in turn, support 600 or more bird species who come to feast on abundant fruits, pluck bugs from curled-up leaves, or sip nectar from colorful flowers. 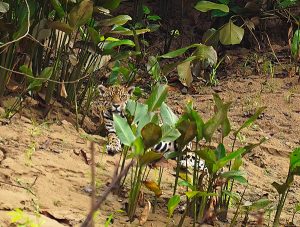 A hundred feet below, mammals scurry across the forest floor in search of fallen fruits (some dropped by birds feeding above!), or dig roots from the reddish clay, or simply browse on leaves.  The Amazon is home to small seed-eating rodents like agoutis and pacas, leaf-eaters like tapir, and enormous herds of wild pigs called peccaries that storm through the forest leaving a wake of muddy tracks and a lingering smell that is as pungent as it is unmistakable.  All these mammals are not without their predators, however, and slipping through the forest as silently as a shadow is the king of the Amazon, the awe-inspiring jaguar. 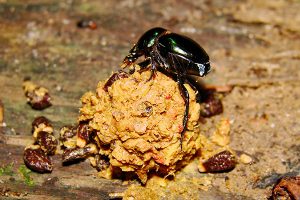 With so much life growing, fruiting, flowering, and dying in the rainforest, it is no wonder that more species of insects are found in the Amazon than anywhere else in the world.  Butterflies and moths larger than birds busy themselves pollinating flowers, while helicopter damselfiels flutter through the air in search of flying prey.  At least half of all animal species on Earth are beetles, and they are hyper-diverse in the rainforest where they feed on fruits, roots, fungus, and even balls of monkey dung. 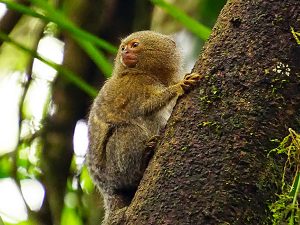 Back in the rainforest canopy, troops of monkeys noisily crash through the vegetation on their daily foraging and territorial rounds.  The Amazon is home to dozens of species, that vary in size and their preferred food.  Some, like the gangle Spider Monkeys eat only fruits, while others have a more varied diet that includes insects and even the occasional bat!  There are nocturnal monkeys, appropriately called Owl Monkeys, which prowl the forest at night with the aid of their oversized eyes.  And there are highly specialized monkeys like Pygmy Marmosets — hardly larger than a chipmunk — whose unique forward-facing teeth are adapted to cut notches into select trees on whose sap they rely almost exclusively.

The incredible diversity of the Amazon developed side-by-side with indigenous groups who call the rainforest home.  But as development as expanded into the humid lowlands of South America, that delicate balance is being upended.  Mining, logging, agriculture, and oil exploration all threaten the Amazon’s biodiversity, and indigenous peoples, and it requires constant vigilance to protect this unique ecosystem.

The Ceiba Foundation is delighted to join forces with the Tiputini Biodiversity Station, a remote outpost in the Ecuadorian Amazon that has helped protect and study the rainforest for decades.  In a new collaboration, Ceiba and Tiputini  will continue the fight to conserve the rainforest and the multitude of species found there.

To learn more about our partnership, and to support Amazon Rainforest conservation, click the button below.