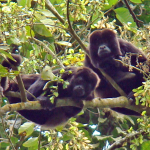 The purpose of the howler monkey project is to study the demography, ranging, and feeding habits of the Ecuadorian Mantled Howler Monkey (Allouatta palliata aequatorialis) within the 200 hectare Bosque Seco Lalo Loor Reserve. By studying the dynamics of their populations, we hope to observe how the population changes over time in response to seasons as well as the changes in landscape outside the reserve. Studying their feeding habits allows us to estimate what constitutes their diet and how it changes over time. Results of these studies will be incorporated into our Coastal Conservation Corridor project so that we can promote plantings of species that are important to maintain howler monkey populations.

The highway mortality study attempts to demonstrate the impact of the coastal highway in Jama County, Manabí Province, Ecuador on the local fauna. The highway was recently expanded and repaved, and traffic has been increasing as the coastal area is developed. The objective of this project in the short term is to map the areas of highest incidence of animal mortality and to determine which species of animals are being most affected. The long term goal of this project is to determine where and what types of mitigation strategies should be placed along the road to best reduce its impact on the local wildlife.

The goal of this research project is to inventory the terrestrial mammals present in the 200 hectare forest fragment that constitutes Bosque Seco Lalo Loor Reserve. We will also use this information to estimate relative abundances of terrestrial mammals. We are currently expanding this project to gain more information on presence and abundance of animals in relation to various habitat factors: elevation, forest type, proximity to human presence, time of year, and time of day. We are also working on identifying individual ocelots by their spot patterns to estimate the density of ocelots on the reserve. We will be expanding our wildlife monitoring protocol to establish baseline data for terrestrial mammals present in areas to be reforested through our Coastal Conservation Corridor project. We hope to establish long-term monitoring of these corridors to document use of the corridors by local fauna and how use changes as the reforested corridors mature.

The purpose of the water quality monitoring project is the investigate biophysical parameter in four streams that drain four watersheds in Jama County: the Tabuga, Camarones, Tasaste and Don Juan rivers. We are examining relationships between forest cover and water quality, including turbidity, temperature, dissolved oxygen, flow, E. coli, and habitat suitability for macroinvertebrates (via a biotic index and a habitat quality score). Twenty-two permanent sampling locations are distributed from source (at the headwaters) to sink (the Pacific Ocean) in attempt to uncover landscape factors that explain changes in water quality. We will be expanding this project to include reforested areas within the Coastal Conservation Corridor to monitor the effects of reforestation of riparian corridors on water quality. 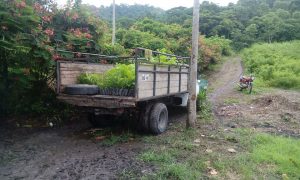 The province of Manabí has some of the most in-tact fragments of Ecuador’s coastal dry forest. With approximately 2% of this habitat remaining, it is important to maintain and expand these patches in order to preserve biodiversity and facilitate species movement between these patches. Ceiba is working on a large scale reforestation project to connect 27,000 hectares of forest fragments and create an unbroken biological corridor. By working with private landowners, we intend to reforest over 200 hectares in prioritized areas by working with local landowners to plant native species alongside cultivates such as coffee and cacao, thus creating an “analog forest” which suites the economic needs of the landowner as well as maximizing biodiversity. The goal is to collaborate with landowners to promote sustainable use of natural resources to increase the productivity of their land while improving soil fertility, water quality, and carbon sequestration. This is a multi-faceted project that will incorporate many of our current research projects as well as new research methods to measure changes in abiotic factors and biodiversity within the corridor.

In order to research sustainable and productive agroforestry techniques, we have begun implementing an agroforestry research plot within the Lalo Loor Dry Forest Reserve to help provide data on the best techniques to be used throughout the coast, mainly within the Coastal Conservation Corridor. The goal is to create an agricultural system that maximizes biodiversity while also creating a productive landscape.