In April, Ceiba established a brand new reserve on the coast of Ecuador, protecting some 1200 acres (500 ha) of rare and threatened tropical forest.  Thanks to our successful implementation of conservation easements to protect habitat while leaving lands in local hands, forest owners increasingly are turning to Ceiba for help.  Among them was Mr. Luis Lopez, who approached the foundation looking for a way to save his sprawling mountaintop forest located on the doorstep of the huge Machalilla National Park.  This area is rich in biodiversity, including iconic species like the King Vulture, as well as many specialists found only in tropical coastal forests. 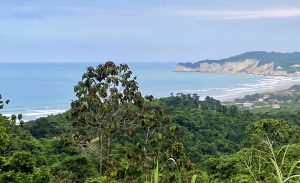 Ceiba’s team in Ecuador leapt into action, conducted a rapid survey of the property, and decided to the conservation opportunity was too good to ignore.  We signed a land-protection contract with Mr. Lopez, in exchange for settling a small debt that predatory loansharks (known locally as chulqueros) were using as an excuse to seize his land, which they would have immediately logged for profit.  This contract will be replaced with a full conservation easement once all the terms are agreed.  At present we are re-mapping the entire property, carrying out more detailed biological inventories, and establishing zones within the new reserve which will include the site of a future ecotourism operation, long a dream of Mr. Lopez’s.

Tropical forests are under assault around the world, and nowhere is the threat greater than on the coast of Ecuador.  Only some 2% of the original wild habitat remains, the rest having been converted to pasture and agriculture to support swelling coastal communities.  The few forests that have been spared typically are small and isolated remnants, and unique plant and animal species are increasingly squeezed into their boundaries.  Ceiba has pioneered an approach of identifying local landowners committed to habitat protection, signing conservation easements to set aside their forest, and assisting them in generating sufficient revenue to maintain and protect the site.  We’ve followed this strategy at the El Pahuma Orchid Reserve, and the Lalo Loor Dry Forest.  Now we have another feather in our cap, and Ecuador’s unique plants and animals have more safeguarded habitat to call home.

Stay tuned as this story develops.  We expect the biological surveys will yield some exciting surprises, and we still need a name for the new reserve!  Please consider supporting our work, so that Mr. Lopez’s forest, and others like it, can be saved.