Ceiba for years has actively monitored wildlife at the Lalo Loor Dry Forest Reserve using camera traps hidden throughout the 490 acre reserve. The goal is to detect the presence of rare or secretive animals, such as the ocelot or wild peccary, and to document their location and behavior. By studying population density, behavior, and habitat preferences of species at the reserve, Ceiba will be better equipped to protect wildlife populations along this unique coast. 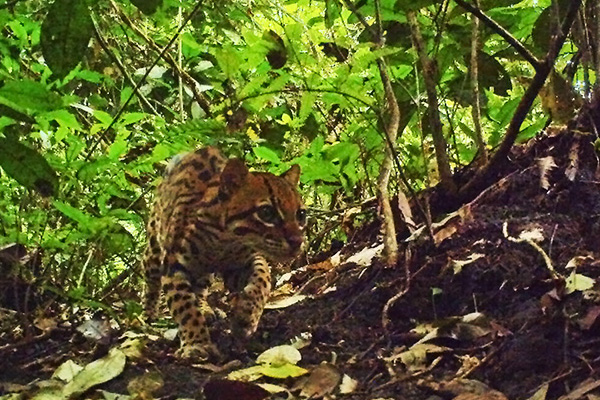 Camera traps allow scientists to continuously monitor species in difficult to access sites. Ocelots (Leopardus pardalis, above) can be difficult to study since they are solitary creatures and primarily active at night. Ceiba staff now are able to recognize individual ocelots by analyzing footage from camera traps to identify unique spotting patterns in their coat. Once we can recognize a single individual, we can learn much more about their habits: where they go in the forest and when, what trails they use, and more.  Ocelots and other felines tend to utilize human-made paths, therefore making monitoring in the reserve a bit easier; a few of our visitors have been lucky enough to see one in person!

The cameras have revealed the presence of some species we rarely see, and others that we never knew existed.  Wild pigs, called peccaries in Spanish (Pecari tajacu), have seen their populations decimated by hunting along in coastal forests, but they are thriving in protected reserves like Lalo Loor.  We’ve seen whole families nosing about in the mud, recorded by the watchful eye of the camera.

Other species recorded by the camera traps are more commonly seen, such as the Tayra (Eira barbara), a large member of the weasel family that is equally adept at running on the ground and climbing in trees.  These medium-sized mammals are important predators on snakes, frogs, lizards, and birds.  One of Ceiba’s interns snapped these photos of a tayra she found overhead (photo: Halley Feil).

Meanwhile, the cameras were recording tayra behaviors in the absence of a human observer (usually they scamper away at the first sound of a person), revealing how these nimble animals move, find prey, and handle food.  Video footage is an excellent way of studying such behaviors, and over the past few years we’ve recorded a lot of video with help from our Science and Volunteer coordinator, Luis Fernandez:

Data produced from the camera trap project is fundamental to the Coastal Conservation Corridor, an effort to prevent forest fragmentation of 75,000 acres along the Pacific Coast by reconnecting isolated habitat patches. Ceiba is working with local landowners and residents to encourage sustainable land use such as reforestation and agroforestry in place of cattle farming and logging. Large, connected patches of dry forest allow species to secure food, find mates and escape threats more easily. Cameras placed in candidate patches allow us to assess the quality of those forests by revealing what species lurk within.  Ceiba asks for your help to protect forests in the Coastal Conservation Corridor and to promote sustainable communities. Please visit our donation page to support these ongoing efforts.