You can explore many beautiful Pacific beaches, on foot or within a short bus ride from the reserve. The Manabí coast from Pedernales to Jama is lined with white sand beaches. We especially recommend the beach at Punta Prieta located just a few kilometers south of the reserve. This beach has showers, bathrooms and a superb restaurant and bar with breathtaking views of the ocean.

Another great beach is at El Arco del Amor, a huge stone arch carved over time by waves. To get there, head south from the reserve 3 km to the town of Tasaste. Take a right toward the ocean in the middle of town (near the soccer field).  Closer to the reserve is the beach at Hacienda Camarones, just a 20 minute walk south, then right through the iron archway. Here, Leonardo Loor operates several beach-side cabins and a cafe for visitors.

The entire Manabí coast is rich with beaches and striking rocky shorelines. The city of Pedernales has a large popular beach lined with small shops, restaurants and hotel.  It is a lively local scene on the weekends. Heading southward, other coastal towns such as Cabuya, Don Juan, and Canoa have nice beaches and offer varying levels of tourist infrastructure. In the southern portion of the province, you can find the splendid beaches and interesting coastal scrub vegetation at Machalilla National Park.

Pacific humpback whales (Megaptera novaengliae) spend June to September in Ecuador’s warm coastal waters, mating and giving birth to their young. These whales then travel to Antarctica to spend the rest of the year (October to May) feeding in the cold, but nutrient-rich polar waters. Whales can be seen in Manabí waters throughout the summer mating period, but are easiest to spot during the southward migration in August and September.

Many boat tours can be found operating out of coastal cities such as Manta, Puerto Lopez, and Bahía de Caráquez. However, the whale migration also can be observed from any point along the coast. A particularly good spot is the Punta Ballena (“Whale Point”) just south of the town of Jama.

The northern Manabí coast still is relatively untouched by tourism. However, extremely good hotels, guest houses and restaurants already exist in the region. Excellent lodging can be found near the town of Punta Blanca in the Punta Prieta Guest House and the Hotel Punta Blanca; near Jama there are several options in the beachside town of El Matal, and there are many hotels in the main cities of Pedernales, Canoa, and Bahía de Caráquez. All these sites offer delicious local cuisine. Other noteworthy places to eat include the restaurant at Punta Prieta, several seaside restaurants in Pedernales, and of course, the fantastic yogurt stand produced by Lalo Loor and sold a short walk south of the reserve!

This map depicts the northern portion of the coast of Manabí, from Pedernales to Jama, and points out the location of some of the attractions mentioned above. 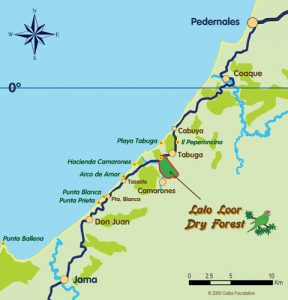